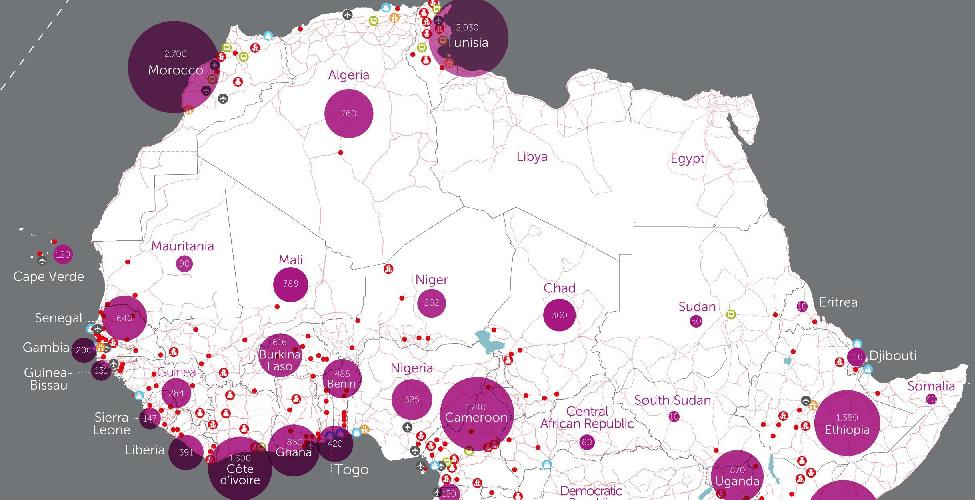 Over its 50-year history, the African Development Bank (AfDB) has financed over 450 transport projects, changing the lives of close to 450 million people across Africa, between 1967 and 2017. Roads, port, airport, and railway projects are all included on a map published as part of the fiftieth anniversary of the first project financed by the Bank, a road project in Kenya, in 1967. In total, the Bank has loaned and granted more than 30 billion US dollars to improve transport systems in Africa.

While almost all AfDB member countries have benefited from financing, Morocco and Tunisia, the countries with the most financing for transport over the past 50 years, received USD 2.7 billion and USD 2 billion, respectively. More than a billion dollars of transport project financing was provided to Kenya, Tanzania and Ethiopia. West Africa ranks next, with Côte d’Ivoire leading the way with the recent urban transport megaprojects.

Among the various types of transport that received funding, roads projects are the most numerous. Some help open up remote regions and stimulate economic development, particularly in agriculture, such as the Koumra-Sarh road in southern Chad. Others consolidate existing transport patterns, connecting African capitals and linking principal ports, facilitating trade. This was the goal of the first project financed by the AfDB, in 1967, for paving two sections of road in Kenya. In total, more than 40,000 kilometres of roads have been paved with the Bank’s financing.

Rail transport plays a fundamental role in the economies and national cohesiveness of many African countries by facilitating the transport of goods and people over long distances. The southern and northern African rail systems include nine of the 14 African countries requesting AfDB funding for rail projects. Tunisia (1975) and Zambia (1979) led the way, while the most recent projects concern Transnet in South Africa (2010 and 2014) and a multinational Mozambique-Malawi project (2015). These two projects are supported by the Bank’s private sector branch, since rail projects are good opportunities to create public-private partnerships.

In the air transport sector, the Bank has supported investment in some 30web airports across the continent. In large countries such as Nigeria or the Democratic Republic of the Congo, both assisted by the AfDB, air transport provides national cohesion and the ability to deal with emergency situations, delivering food and medical supplies, for example. In financing airports for island nations such as Cape Verde or the Seychelles, the AfDB assists in bringing them into the global flow of trade and tourism. In addition to financing terminal construction, the AfDB has been involved in air security improvement over the past ten years through the establishment of training programs and provision of equipment through regional economic communities, the most recent of which concerns 25 Central and West African countries.

“To reach their full potential, transport projects must be supplemented by investments in other economic sectors,” according to the evaluators of the first transport project financed by the AfDB. They set the stage for what has become the Bank’s holistic approach: support local economic players and associations and strengthen health and education services. Adapted to the local context, such projects help maximise the projects’ impacts on people’s daily lives.

Started under the leadership of the East African Community, the first project financed by the Bank recalls the importance of the Bank’s work as a coordinating body in close collaboration with regional economic communities. Encouraging discussions between political decision-makers, building capacity in public institutions, standardising regulatory environments or simplifying customs procedures are important tasks that cannot be shown on the map, but that play a key role in facilitating the movement of people and goods around the continent.