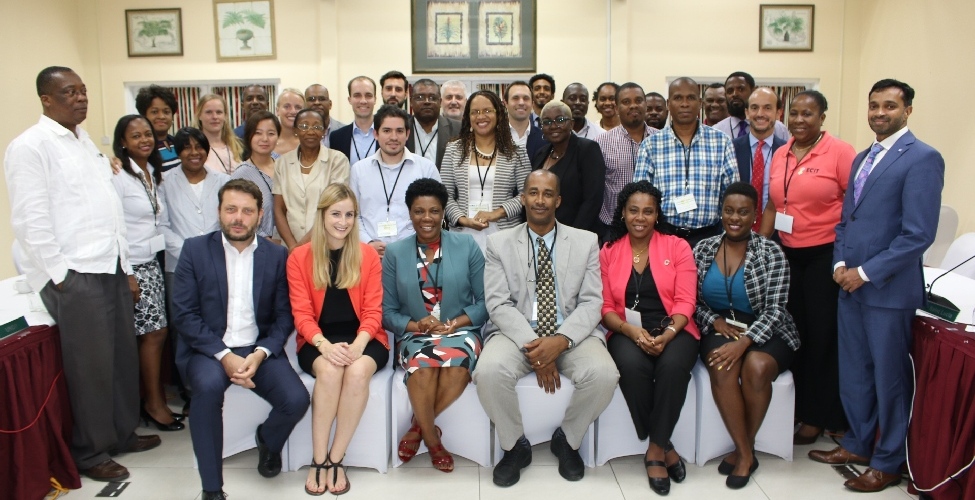 In the wake of this year’s shocking damage inflicted by Hurricanes Irma and Maria, delegates focused on rebuilding national infrastructures which will withstand such extreme weather and give them the chance to implement the ambitious climate action plans they have put forward under the Paris Climate Change Agreement.

The September Investment Forum, hosted by Saint Lucia in partnership with the Organization of Eastern Caribbean States (OECS), NDC Partnership, Deutsche Gesellschaft fur Internationale Zusammenarbeit (GIZ), and the UN Climate Change Secretariat, was a timely reminder that for many developing countries investment must be carefully balanced between adapting successfully to climate change and building clean energy solutions.

Nyasha K.K. Hamilton, from the Ministry of Economic Planning, Sustainable Development, Industry, Information and Labor, of St. Vincent and the Grenadines said that climate change should be seen as not just an environmental issue, but a developmental one as well.

“Countries were already in the process of rehabilitating their critical infrastructure to withstand 1 in 100-year and 1 in 200-year events. These efforts have proven to be quite costly but are also appearing to be insufficient as the probability of rarer events occurring has increased which has had the effects of negating these efforts.”

Dr. Ubaldus Raymond from the Ministry of Finance, Saint Lucia, said: “It is technically feasible to construct buildings, roads and other infrastructure that can withstand Category 3 and higher hurricanes. But the cost of new construction, especially for Category 5 hurricanes would be significantly higher, and in some cases, unaffordable. Many countries are experiencing Category 4 hurricanes so there is need for further research and analysis.”

Inspired by the Pacific Energy Conference in 2016, which raised more than USD 1 billion for Pacific Island energy projects, the meeting was aimed at galvanizing key development stakeholders to lay the groundwork for a wide range of projects across many sectors to provide clean energy, safe drinking water, eco-friendly transport solutions among others.

The six member states of OECS have set ambitious targets in their Nationally Determined Contributions (NDC) for environmental sustainability and protection from climate change. NDCs are national climate action plans submitted by signatories of the Paris Agreement setting out their plans for reducing carbon emissions and for adapting to climate change.

“Developing countries need much more international support to increase their capacity to implement their plans,” said Don Cooper, Director of UN Climate Change’s Mitigation, Data and Analysis unit, “but they also need at the same time to build up a pipeline of agreed and funded projects ready to go, as soon as that capacity has been achieved.”

Participants stressed the importance of building partnerships for technical and financial support, including with private investors, to fund these development projects since governments’ budgets would not be sufficient due to the level of investment required.

The successful implementation of NDC-based renewable energy targets in the Eastern Caribbean States has the potential to add around 227 megawatts of power capacity by 2030, based on a mix of geothermal, wind and solar energy sources.

The cost involved in the transition toward a renewable future is a big challenge. In another presentation during the meeting, Rocky Mountain Institute showed estimates that USD 2.4 billion will be required to transition OECS countries to 70 per cent renewable energy penetration in the next two decades. The role of the private sector would therefore be key to fill the financing gaps and turn countries’ climate goals into concrete actions.

Additionally, there is a need to conduct feasibility studies for renewable energy, build technical capacity, align all stakeholders around a clear strategy and remove regulatory and policy barriers.

Clear data on the aspects and costs of an energy transition, including the requirement for a greater level of resilience, would help countries attract donors and help overcome their limited borrowing capacity for development projects.

Forum first step in long-term effort supported by the partners

The OECS will now work together with development partners and private sector stakeholders to develop a pipeline of investible projects suitable for the region to draw investment for their key development initiatives.

In addition to exploring bilateral funding sources, governments will reach out to financial actors from the domestic and international private sector and multilateral development banks.

OECS countries believe that so far most private investors have preferred to go to countries where they can make large investments and reap bigger returns. Governments recognize this challenge and are stepping up efforts to ease policy and legislative barriers to facilitate the entry of the private sector.

“We are updating policies to ensure there are guidelines in place to manage increased interest in investment. We will need rigorous review and approval processes in place in order to streamlining the process of responding to the investors,” added Nyasha K.K. Hamilton.